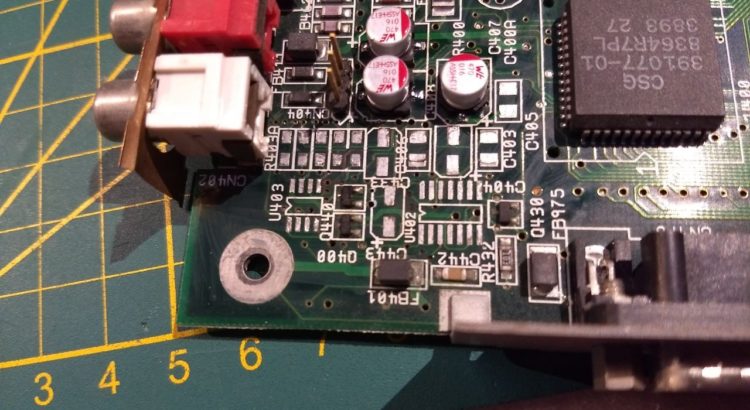 On the bench an Amiga 4000 which had a recap and a fix on the audio circuit.

Audio was not working at all so i replaced all corroded components like the LF347 and LM833 opamps and several small components (resistors & ceramic capacitors). After the replacement the audio is working, but sounded weird, did some tests with the Amiga Test Kit (formerly know as SYSTEST). When I disabled and re-enabled the cutoff filter I saw some (slow) shifting in the audio signal.

I removed some components (R435,R445 & C409) to narrow down the area which is causing this problem. After removing C409 the audio signal was good, so I replaced it. But after that the problem was back again. I asked Peter Mulholland for his outlook  on this, he pointed me to some things I already checked, but there was one thing I did not checked, R406 was missing -AV (-12V), because of that the collector of Q400 wasn’t switching between -AV (-12V) & +AV (+12V). I added a jump wire between C402B & R406 and it is working again as it should.

Little background, the Q400 is supposed to switch the JFET’s (Q430 & Q440) on or off, but because it was not switching to -12V the JFET’s staying active all the time, the capacitor slowly draines the current from the circuit causing that the JFET’s switches off after some x time. 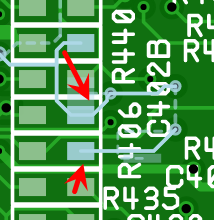 Signal after the fix: