How Can We Help?
< Back
You are here:
Print
ByTristan Zondag

This time a Commodore CDTV arrived on my workbench with the following symptoms:

After checking that the CD mechanism worked fine using an audio CD I tested with several CDTV discs both original and recordables. During loading the CD spins up OK and there is focus and head movement, but nothing happens. Black screen: the Amiga waits for the first data. So the device does recognize that it’s not an audio CD and tries to read data.

Time for disassembly. First take a picture of the main board so you know which connector goes where later. Tip: after removing the cover, remove the front panel. This will make taking out the CDROM unit later easy. Two screws on the top, disconnect cables (tip: the flat cable connectors need to push DOWN to unlock!) and carefully slide towards you and put aside. Next remove the tuner or scart board from the back side (two black screws, then pull out). The back panel can stay in place. Next unscrew the main board: one screw in the middle at the front, one screw around the middle left side, two screws backside top left and right, and last one screw in the middle. The other screws you can let be. See the pic: 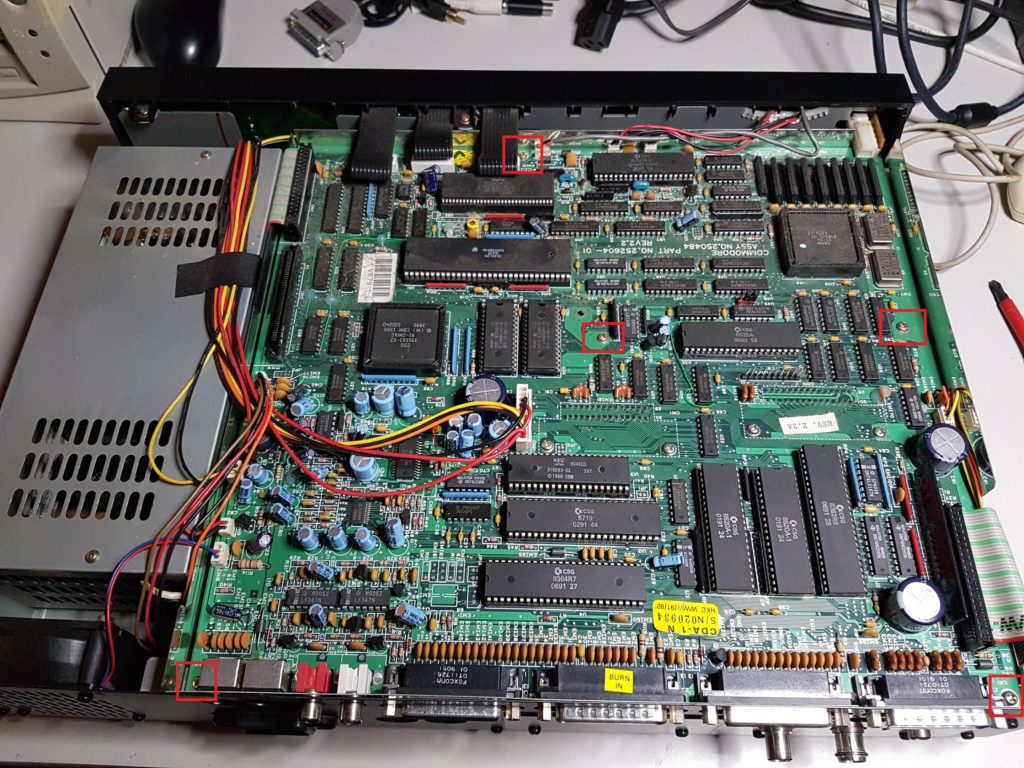 Take out the motherboard by lifting slightly at the front, pull towards you and put aside. Look at the CDROM drive mounting chassis: it has 4 screws on each corner, unscrew and then take out the chassis. Flip it over. Remove the 4 screws that hold the CDROM unit to the cassis, it will give more room on your desk. 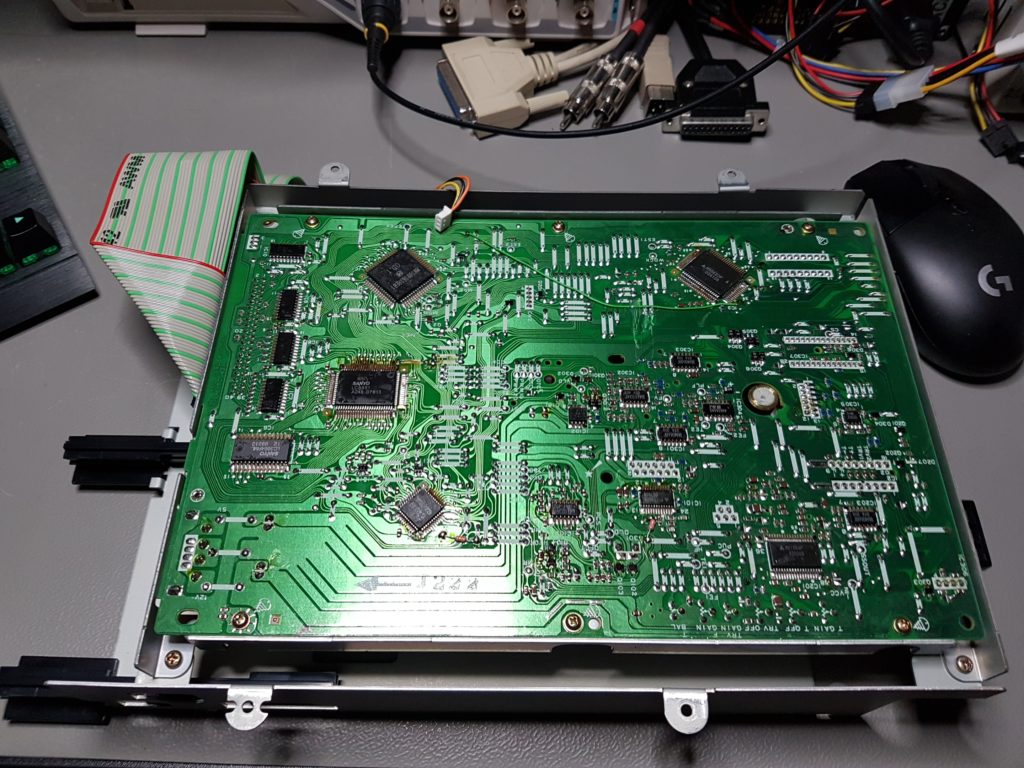 This is what you should end up with before you: 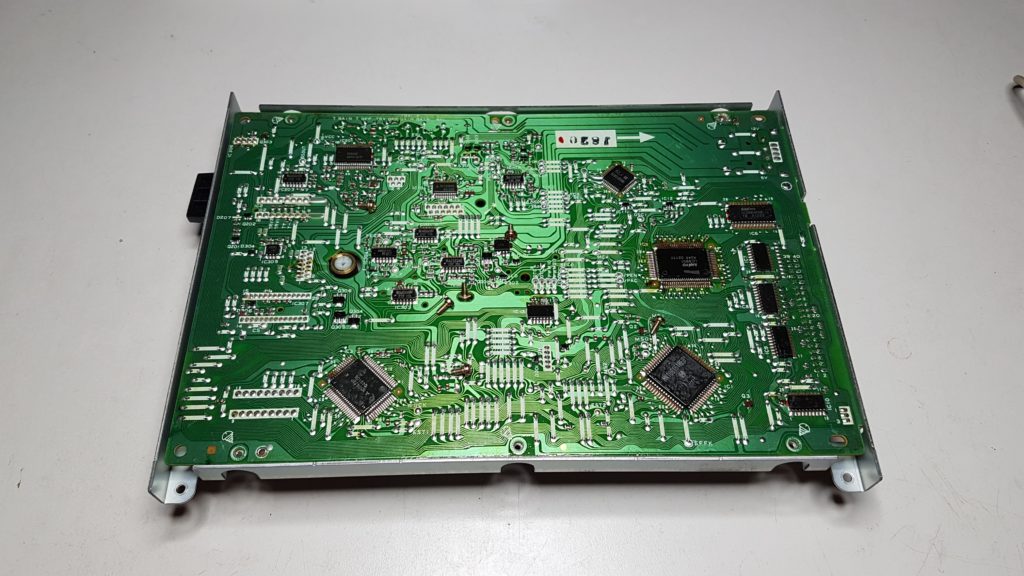 Ok – now for the problem diagnosis. I fired up the scope and looked at the various ICs on the board and checked their datasheets. You can visually follow the traces and get some kind of clue about the flow of data. See this pic where I draw the high level workings of the board:

The digital section starts at the CD DSP, to the left. It takes the analogue signal from the lens (‘eye pattern’) and converts it to a 8-bit parallel digital stream. Then the micro looks for audio packets and creates a serial digital stream that goes to the CDTV with the 3-wire cable. It also (always) sends 8 bits of data towards the error correction MCU.

According to the datasheet of the Sanyo LC8951 the operation is as follows: upon recognition of data sectors it stores them in the SRAM and applies error correction if necessary. When error correction is done, the MCU reads back the corrected data and streams it to the host interface transceiver one byte at a time.

When measuring around this section with scope, with a CDROM loaded, I observed absolutely nothing happening on the SRAM or the output side of the MCU. Strange! All input signals appear to be there. Another CDTV saved from the bin. As these drives are unobtainium, well, unless you sacrifice another CDTV of course, it makes sense to spend some time trying to repair them. 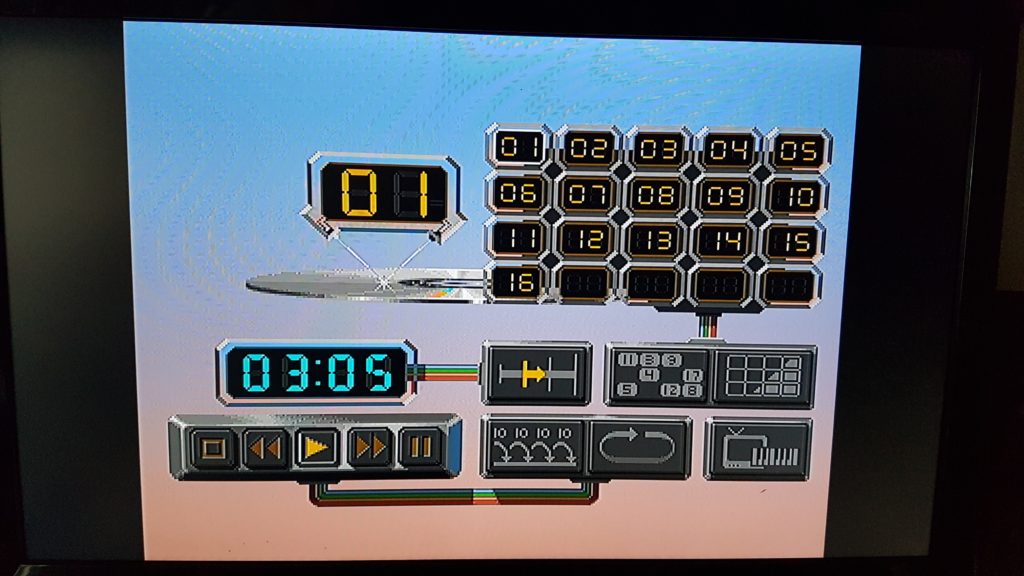 Another issue that can occur with the CDTV is leaky capacitors. The drive mainboard uses miniature aluminium electrolytic capacitors, and sometimes bad quality ones are used that start to leak. It will make the drive not work at all, on insertion of a cd it will spin 1/4 rotation and just stop.

The drives with this symptom that I have seen all had the 10uF capacitors fail. This drive seems to have perfectly fine capacitors (but you may opt to replace them preemptive). Next, disconnect all ribbons and cables. The motor cable connector needs to be unlocked first. 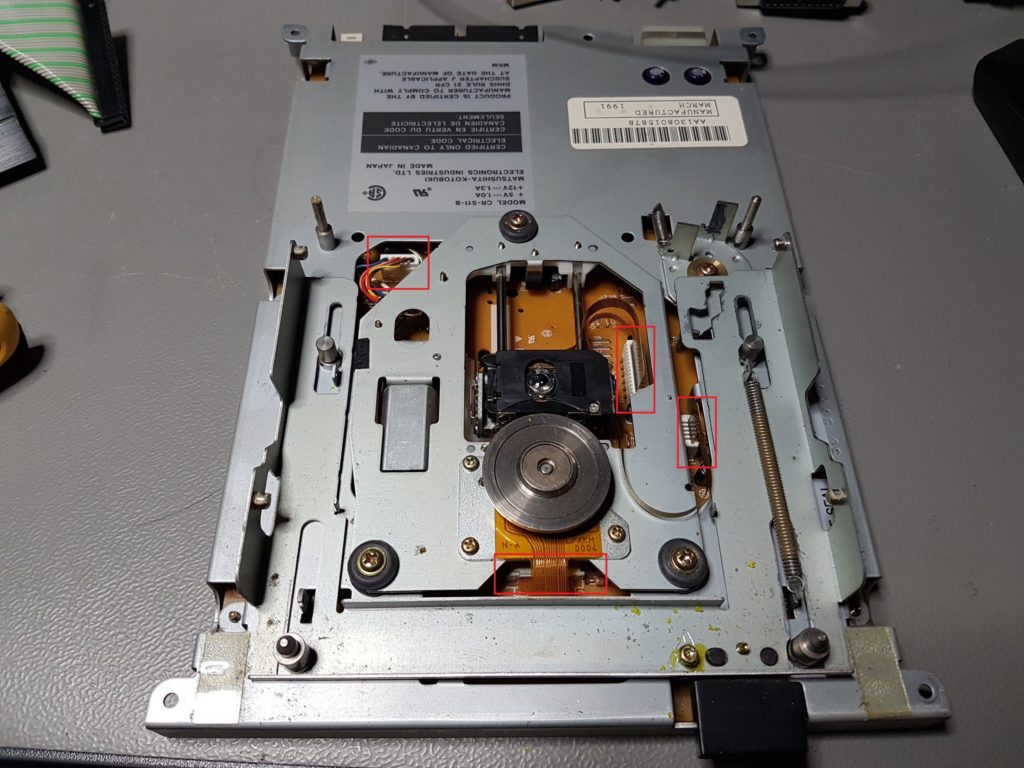 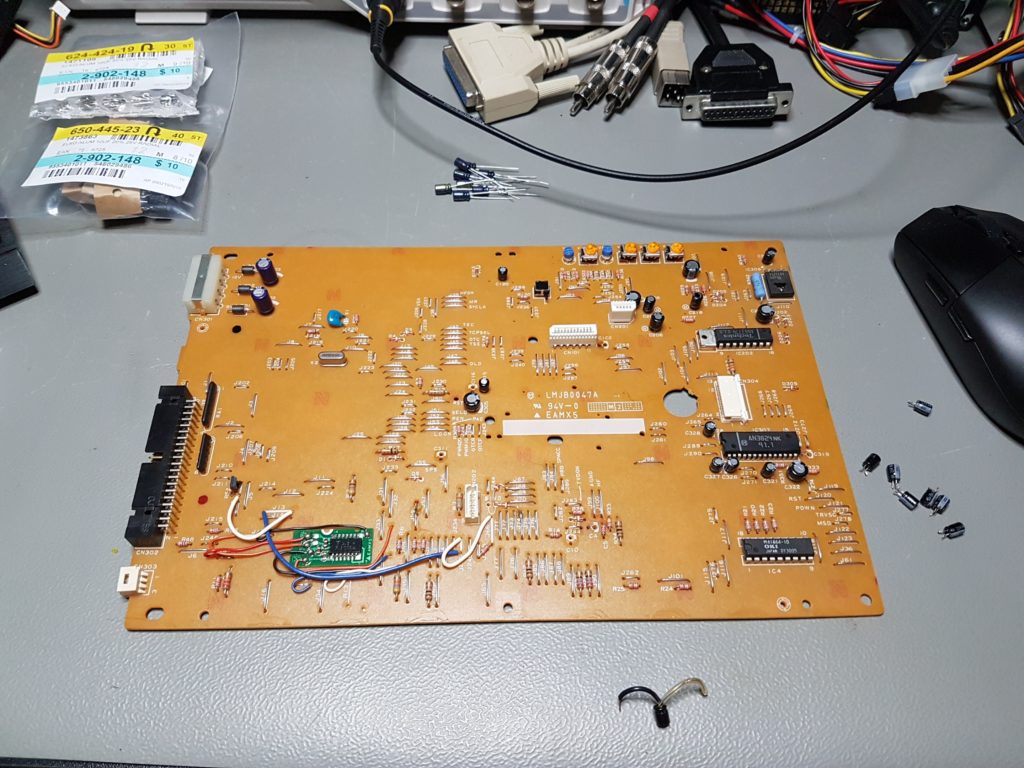 Pay attention: there are a few non-polarized capacitors. You can replace those with 1206 MLCC capacitors since the NP ones are really difficult to source.

Re-assembly can be especially difficult since the flatflex cable coming from the spindle motor is almost impossible to get back in. Tip: unscrew the spindle assembly (3 screws) then you have a lot more room to work with.