Skip to main content
How Can We Help?
< Back
You are here:
Print
Bytbtorro

A600 r1.5 boots from HDD or FDD, but locks up immediately when a folder or executable is doubleclicked in WB. Sometimes it would open a folder but would lock up starting a program afterwards.

RAM, ports, PCMCIA, mouse, kb, disks all tests fine (booting a diag directly from FDD) but on sound test the system would lock up at attempting to play the first note. DIAGROM tests fine (including sounds) but reports IRQ4 error.

Cause: Corrosion around R152B and R953C (right below PAULA) caused the IPL2 line to be cut (open instead of NEG) – see screenshot. Paula seems to heat up more than normal  while this line is open. Fixing the continuity solves the error. 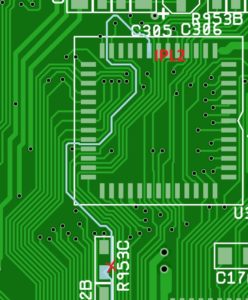