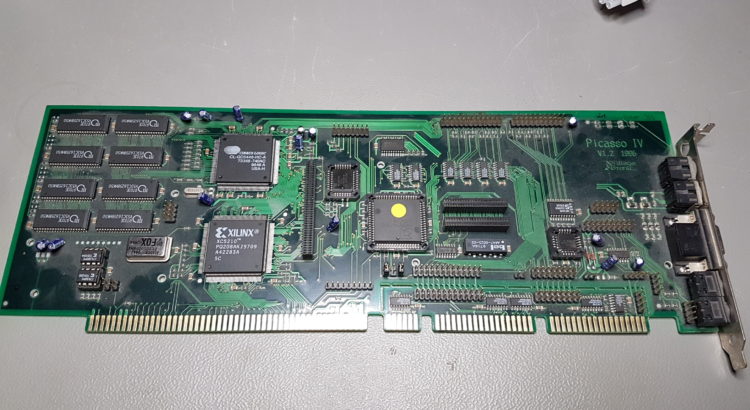 Next up is an interesting Picasso IV Zorro 3 board that I’ve worked on earlier this year. A friend gave it to me for repair with the comment: it doesn’t do anything. So, after visually looking around the board, I noticed some bad solderings on the Cirrus logic chip. Touching them, at least 10 pins were loose.

Can you spot the bad solderings? After reflowing loose pins of the Cirrus chip, the board was detected and I could load Picasso96 and select a screen mode. It looked like this: Big square noise thingy is actually the mouse pointer 😀
But no, this is not right, but the picture is stable except for flickering pixels.

This looks like something may not be right with the VRAM. Checking voltages .. whut what? Vcc on the RAMs is a little over 1 volt. That can’t be right, right? It’s a 5v only board.
Following the source of the Vcc line I found this little bad boy: It decided to be a 1k ohm resistor in stead of a 0 ohm one! Hence no power to the RAM chips. Decided to replace it with a ferrite bead since no 0 ohms in stock. The RAMs shall get a nice clean power now 😛 Measuring again.. yup, now the RAMs do have a nice 5v power.

Let’s see what it does now: 7 thoughts to “The Picasso that didn’t want to paint”