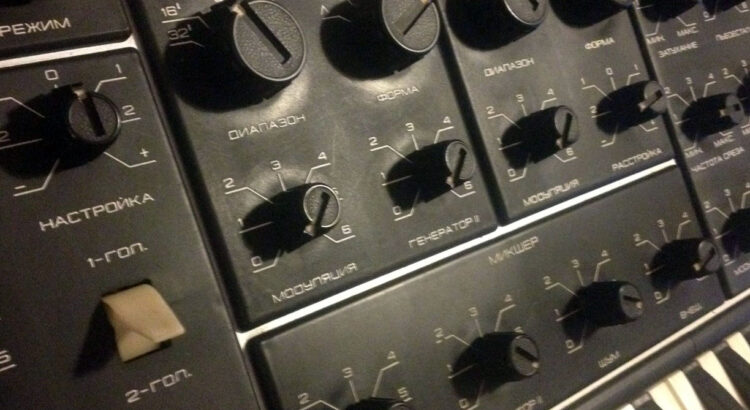 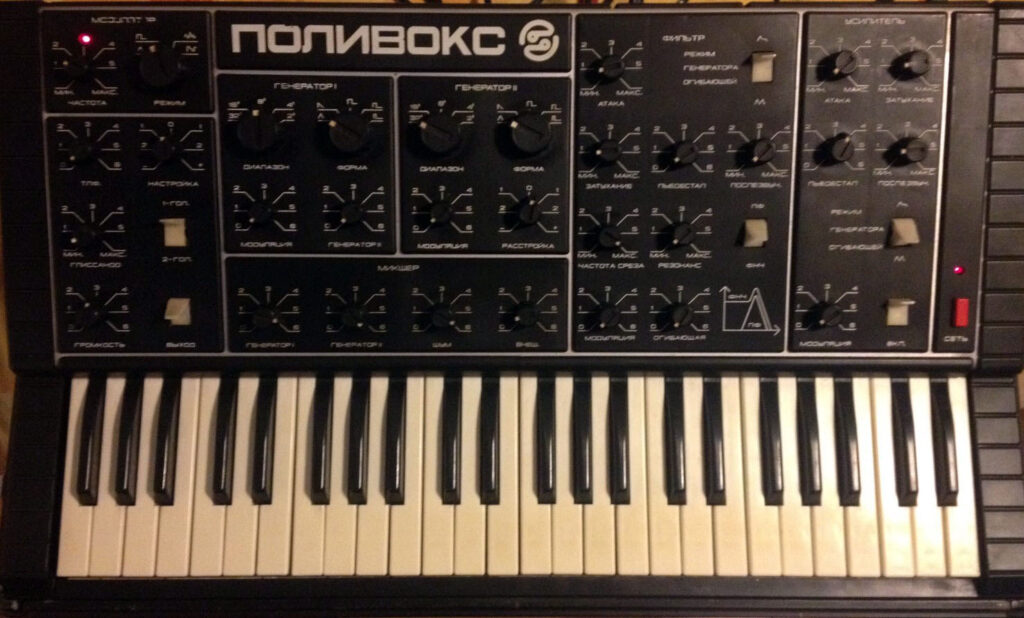 This article is about a repair I did back in 2014 on a Polivoks (Polivox) synthesizer. I came across some files on my harddrive about it, and I want to share it so maybe other people can use it that are facing the problem(s). Sadly I don’t have (or make) all pictures I made during the repair process, sorry for that..

A little history about the Polivoks Synth

Duophonic analogue synthesizer made in 1980s by “Formanta” radio factory in USSR. Most commonly known Soviet synthesizer in the West. Has 4 octave (F-E) keyboard, 2 VCO, 1 LFO, 1 VCF (BP/LP), 1 VCA, mixer. What this beast is most known for is its evil-sounding filter…this beast is great for killer bass lines, lovely strings and pads as well as all sorts of sexy squeals.

Polivoks is the portable electronic musical synthesizer which is designed for playing different musical compositions of any genre. It is also intended for creating some musical effects in cinema and play scoring, in studio. There are 4 octaves on the keyboard. The inclined desk is divided into the following functional sections: Modulator, Generator #1, Generator #2, Mixer and Amplifier. They give one a possibility to synthesize a broad spectrum of sounds and to change sounding at any time. There are 3 internal audible signal sources in the instrument: to broadranged of the Generators
with changed form of oscillations and a noise generator for creating a nonmusical sounds such as wind, surf, whine, etc. Possibility to connect an external audible signal sources to the synthesizer is provided for (e.g. guitars, electropianos and electroorgans). Sounds of different external sources are combined separatly in the mixer in any ratio. There is a filter in the synthesizer with cutoff frequency control and resonance to change colour of timbre of audilble signal over a wide range. Engineer: Vladimir Kuzmin, designer: Olympiada Kuzmina, hardware engineer: Yuriy Pheophilov,
produced by Urals Vector Company.

No synthesized audio came out of this machine.

First there was no sound at all, that was caused by one of the main output connectors that was bended, so there was no contact with the signal cable plug. Bowed it back, and there was some kind of distorted sound with a very low volume level. I also discovered there was a 50Hz signal interfering with the synthesized sound, found it with my scope.

Because I supected the 50Hz interfering was caused by one or both of the 2 capacitors, I started to do some measurement on the capacitors. One of the caps had a very low AC voltage level, so my guess was those caps were dried out, so I decided to order some new ones. That sounds like an easy task but it was hard.. My guess is that those caps where manual build by the manufactorer of the Polivoks, no text/type/coding on those caps, just a cilinder with some kind of rubber around it. So tried to measure them with my simple capacitance meter, but that couldn’t measure them, so I started a search on the internet and figured out that it suppose to be 2200uF caps. 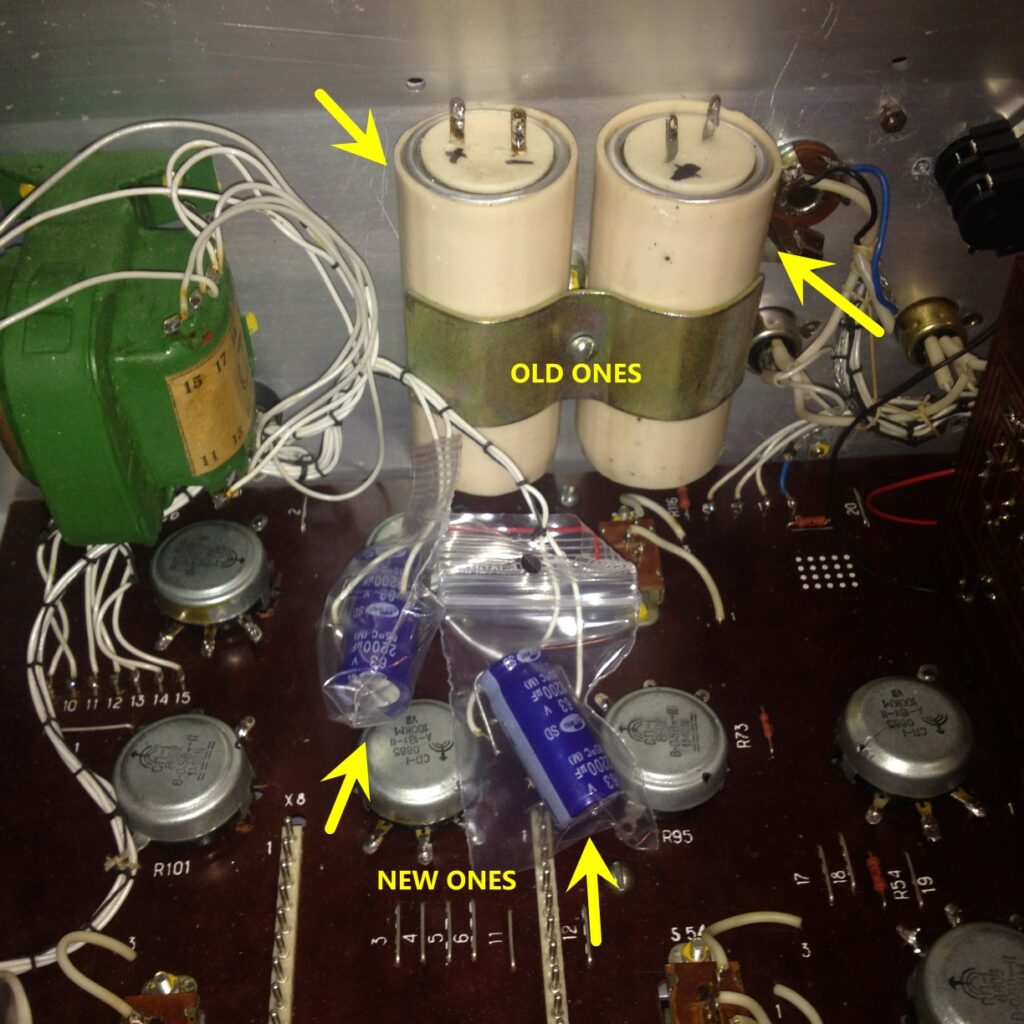 The new ones where “slightly” smaller than the old ones.. so I took some rubber material to support/hold them so they fitted into the clamps. 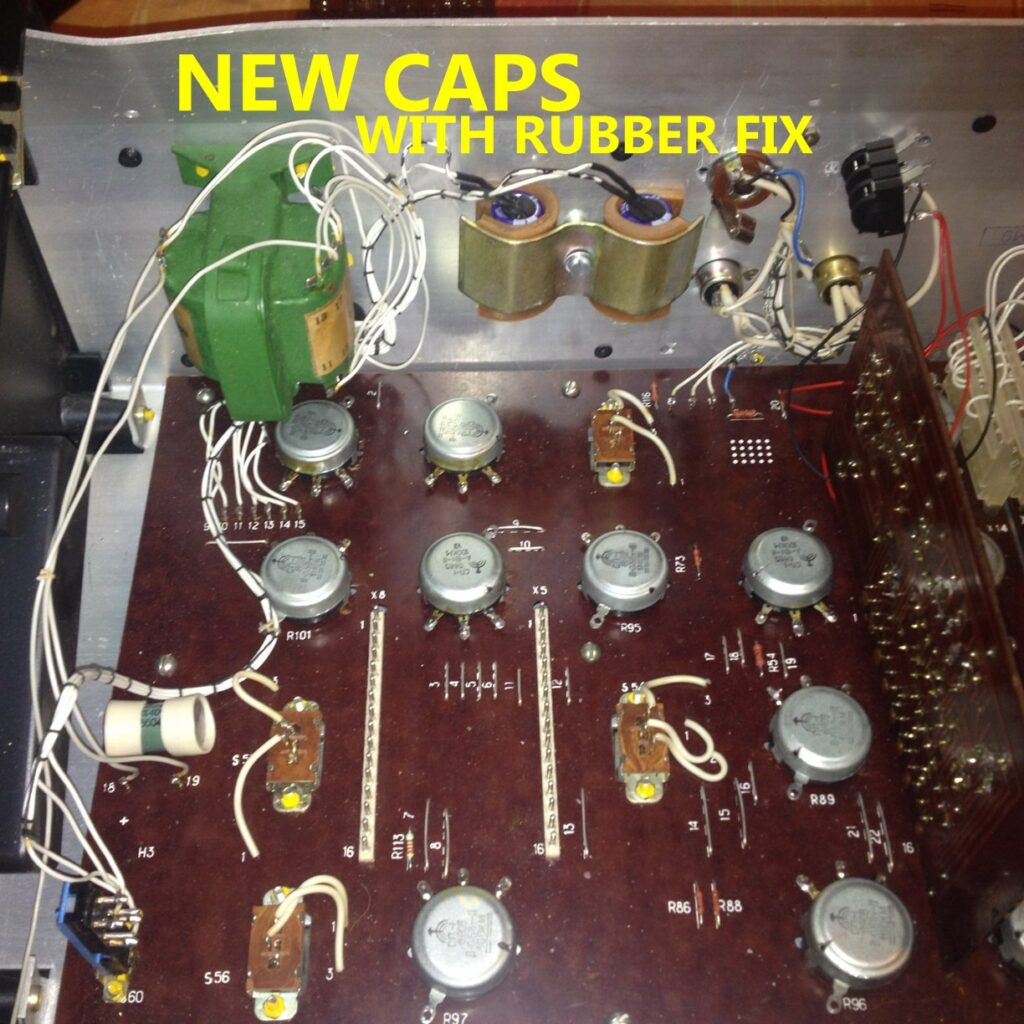 After the replacement the synth seems to work, the 50Hz interfering was gone but it sounded still awfull (distored).. hmm.. let’s see.. 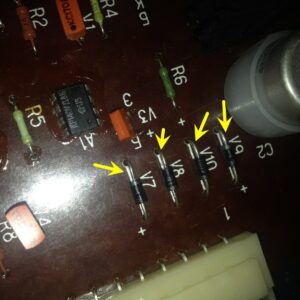 One of these diodes (V8) was bad.. I decided to replace all diodes preventively, after that the machine works.. I played some keys, but the audio output still has a very, very, very low volume level.. removed all the modules and reseated them.. but still same problem..

After some measurements I figured out one of the opamps of the mixer module is outputting a very low signal.. so my guess it was broken.. AND NOW!!! The next task.. find a new opamp.. euhh… the OPAMP has a text mask with cyrillic signs/chars.. hmmm.. I luckilly found a few on ebay from a Lithuanian seller.. replaced it.. AND YES! Audio/Sound output is good..

No hum anymore, sound is good.. so mission accomplished! 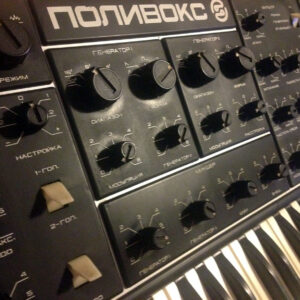 The next thing I did, was calibrate the synth. Found a document with the procedure.

The repair was succesful.

I made some recordings of the synth, and it sounds fantastic! never heard a synth that sounds like this, pretty awesome!!

Schematics and other information

On my search to find information about this synth i found several documents, I zipped them into a zip file: